Lightness and heaviness are not from among the four properties of the اسم . Rather, the discussion of light and heavy is a sub-topic that falls under status. Now that we have learned about the different markers that we can use to determine status, we will learn about different variations and forms that these markers can take.

Notice that every word in the مسلم chart ends in an ‘n’ sound, whether it be an ending sound or combination. These words are considered heavy. HEAVY is the DEFAULT. To make a word light, all you have to do is remove the ‘n’ sound at the end.

To get rid of the ن sound in Arabic, use the following rules.

2.    If the word ends in the letter ن, all you have to do is drop the ن. For instance, the word مسلمون becomesمسلمو.

Below are the مسلم charts in the light form. Memorise them.

As stated previously, the heavy form is the default form for an اسم . An اسم is not made light unless there is a reason. The details pertaining to these reasons will be discussed later on in the book. 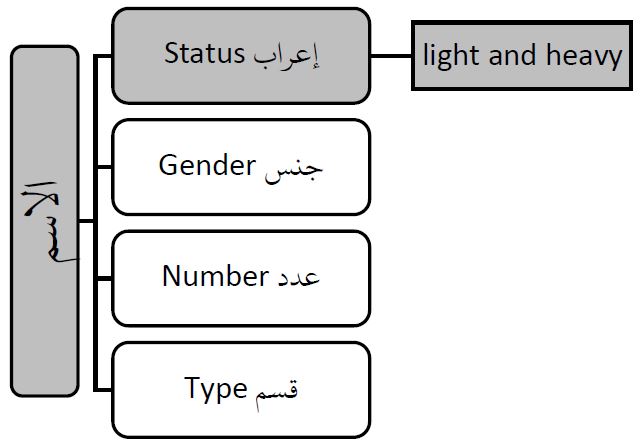 ·       Note that the discussion of heavy and light becomes irrelevant when the word has an ال on it. This is because تنوين and ال NEVER come together. For example, the word المسلمٌ is incorrect. You can only say المسلمُ . The words that end in ن, on the other hand, keep their ن even when there is an ال on the word. The word المسلمون is correct; there is no need to drop the ن.

DRILL 4: Are the following words light, heavy, or irrelevant?