Flexibility is not one of the four properties of the اسم. Rather, it is a sub-topic under status. This topic, just like light and heavy, deals with the different forms the status markers can take.

** The discussion of flexibility only pertains to words that have an ENDING SOUND. **

Therefore, for flexibility we are only focused on the following parts of the Muslim Chart:

There are three forms of flexibility. They are:

We will discuss partly-flexible last, because it requires the most attention.

FULLY-FLEXIBLE (مُنْصَرِف/مُعْرَب) is the default state for a word. It is the broadest category. A fully-flexible word is a word that can show all three statuses in a normal way according to what we learned in the مسلم chart.

NON-FLEXIBLE (مَبْنِيّ) words are the opposite of fully-flexible words. They can never show their status. This means that they look the same in the رفع status, the نصب status, and the جر status. Words that end in أَلِف مَقْصُوْرَة (ى) or a normal ا (ا) are non-flexible. Words like مُوْسَى, هُدًى and زَكَرِيَّا, for example, are non-flexible. All of the pointer words (الإِشَارةِ أَسْماءٌ) in the singular and plural forms as well as all of the أَسْماءٌ موصوله are non-flexible. We will learn about these types of أَسْماءٌ in detail later.

For the time being, learn to recognize them and know that they are non-flexible.

Non-Flexible Endings all look the same, there is no way to distinguish them by looking at the word alone:

Notice that نصب and جر look the same. We have seen this problem before in ending combinations.

HOW TO INDENTIFY PARTLY FLEXIBLE WORDS

There is one exception to this rule. Three-letter names with a سكون on the middle letter are always fully flexible, even if they are non-Arab names.

All feminine names are partly-flexible. Masculine names that have no feminine counterpart are also partly flexible. Below are some commonly occurring uniquely masculine names. Memorize them. We will learn the rest as we encounter them.

Again, three-letter names with a سكون on the middle letter are always fully-flexible.

Proper names of places are partly-flexible.

Some names of places have an ال . In such cases, the name is fully-flexible.

Names of places that are three letters with a سكون on the middle letter are fully-flexible.

There are certain word patterns that are partly-flexible. We will look at these patterns in our study of Sarf.

Note: In your vocabulary, partly flexible words will be denoted by having a single vowel ending, not a تنوين . For now, as you memorize new vocabulary, make a note of which words are partly-flexible. 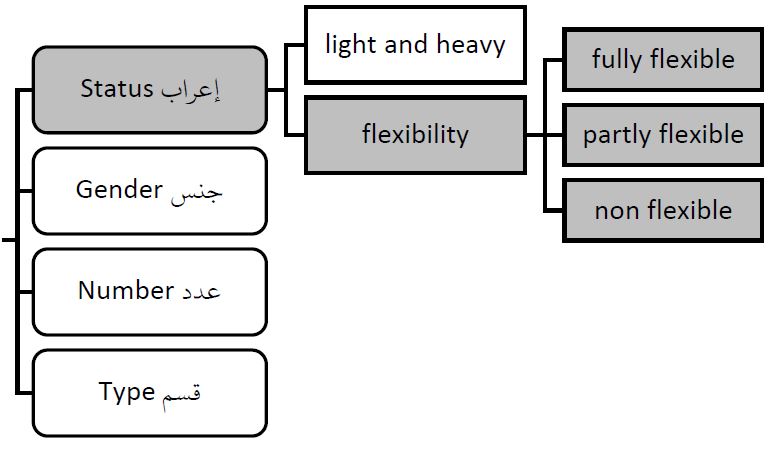 Drill 5: Are the following words fully, partly, or non-flexible? Why?